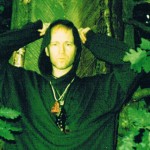 Jeff Tarlton is a musician living in Berlin since 1992. He was born and raised in Detroit, Michigan. After performing at a local Berlin bar in 2002, Thomas approached Jeff which led to him producing and playing on the St. Thomas contribution to a Lee Hazelwood tribute cd released by his then label, City Slang. As a result Jeff became one of Thomas’ early Berlin friends. He also opened for St. Thomas when his tour passed through Berlin later that year. In April/May 2003 Thomas brought him up to tour Norway as their opening act. Last year Jeff had a feature profile in the definitive music-history book Seasons They Change: The Story Of Acid And Psychedelic Folk. His band Viv Akauldren was described as one of the few leading lights of the 80′s in American mystic folk rock. While his solo albums of the 90′s went even further, to become classics of the genre – well ahead of its revival occurring in the mid 2000′s.