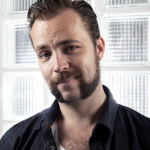 Henrik Horge is a Norwegian actor and musician. He has been Thomas’ close friend since they met in secondary school in 1992. Together they made music on various occasions – with Henrik participating as a band member of St. Thomas & The Magic Club. Performing live with Thomas in the 90′s, Henrik would play either the organ or percussion. After attending the Oslo National Academy of Acting in the early 2000′s, he came back to St. Thomas as a background singer and percussionist. He is starring in several St. Thomas music videos, such as An Artist With A Brilliant Disguise, Sunny Day and Come My Way. Henrik Horge will be our toast master for the evening. Together with his actor collegue Steinar Taarn Sande he performs as a duo called Brødrene Löwenstierne.