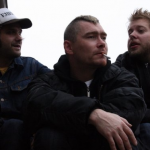 Picture by Reidar A. Eik

Alexander Lindbäck played his first St. Thomas show January 7th 2004 in London. He stayed on as map reader, drummer and occasional banjo and guitar player for about 100 gigs. Alexander’s playing can be heard on the albums Children Of The New Brigade and There’s Only One of Me. He was also Thomas’ co-songwriter on the hidden track and fan favorite from the Brigade-album, Like The Byrds.
Thomas discovered the drummer through Alexander’s songwriting, singing and guitar playing with the band Seven Doors Hotel. The boys hit it off as friends and when Thomas learned that his first instrument was the drumkit, he asked Alex to join the traveling St. Thomas Circus. Alexander Lindbäck is still writing songs and currently recording the 4th Seven Doors Hotel album. Seven Doors Hotel is a touring band in Norway, but Alexander also plays acoustic solo shows under the moniker Seven Doors HoStel. Their song Cool too die is an hommage to Thomas Hansen.

Petter Pogo is best known as bass player with Jokke & Valentinerne but also played  guitar, mandolin and keyboards on several records with other groups. Petter and Thomas met at the last show of Let’s Grow Together Tour in Lillehammer, where Petter was first invited to join in on bass on that show and later to join the new touring group about to take shape with Alex Lindbäck on drums and Espen Mellingen on guitar.
Together they recorded demo’s for the next album, toured for a bit and then recorded Children of The New Brigade. Petter was a band member along with Alex after Espen left the touring band and the threesome toured extensively in central Europe before a final split after the tour. On the next album There’s Only One Of Me Petter plays the bass guitar. The bands Senjahopen and Valentourettes are taking up most of his time but there is room for the nice group Lasso, who has an album to release late 2012.